Setting up ansible is the easy part. This can be done by simply setting up the Ansible host with SSH key based access to all machines that it will be managing. I set it up with root access to those machines so that it could do mass updates without problem or requesting dozens of passwords and because I don’t have Kerberos or a domain based login system.

Prerequisites on the systems:

Installing Ansible on the host machine was as easy as yum install ansible, though for a more recent version, one can install it from the GIT repository. This is covered in many other locations so it won’t be covered here.

Run the following commands on the machines that will be managed by Ansible:
>sudo su
>mkdir ~/.ssh
>touch ~/.ssh/authorized_keys
>chmod 700 ~/.ssh
>chmod 700 /home/administrator/.ssh

These commands generate a public key / private key pair to use with SSH key based logins to the systems. This then copies the public key over to the machine we will be managing.

This command copies the public key from the local user to the root user, allowing Ansible to login as root and manage the machines.

This adds the rapternet group with shodan, pihole, webserv, matrapter, and unifi servers in it.

One easy way to test the ansible setup is to ping all the machines:
>ansible –m ping all

This tests their basic setup with ansible (requirement of python 2.x on each machine, ssh connection functioning). 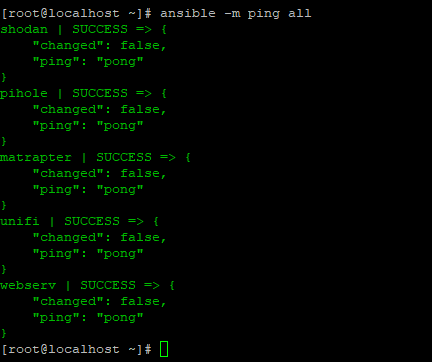 As can be seen, all servers are outputting that nothing has changed (which is to be expected with a simple ping) and that the pong response was sent back to the host. This is a successful test of the Ansible setup.